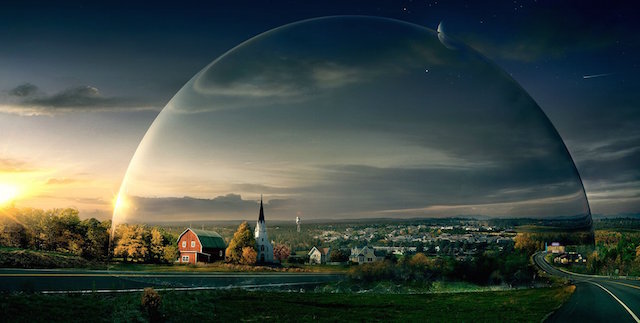 Remember that TV show a few years ago called Under The Dome? It was about a clear dome that appeared one day over a town in middle America. It isolated the town population from the rest of the world. Everyone was fine inside the dome, they just couldn’t break through to the other side. Some didn’t know the dome existed and others were frantic to break out of the confinement.

Living in 3 dimensional consciousness is similar. Whether it is called the dome, the veil, or the wool before your eyes, it’s all the same thing. We as human beings have limited awareness of our surroundings and situation. We have forgotten who we are, where we come from and how to remember. Why we are subject to the veil of forgetfulness is another topic for another day, but it is undeniable that it exists.

If you want to remember, if you want to break through the dome and explore all that is beyond that barrier, know that you have the power to do so. Not unlike those crazy yoga poses, it looks quite impossible to achieve until one day it happens and you understand it was nothing more than a mindset that kept you from achieving your goal.

The difference between being trapped inside the dome or walking through it is simply consciousness. 3D consciousness vs multidimensional consciousness. It is the willingness to see and accept that multidimensional reality does exist. If you find yourself in a vast room that is pitch black does it mean that you are alone in nothingness or do you simply not have the ability to see in that environment? We are taught that only the 3D reality exist but that does not make it so anymore than telling yourself that the room is empty.

To develop your consciousness so that you expand into multiple dimensions takes patience, determination, focus, intent and most of all practice. Again, just like that yoga pose, you must practice, you must try and fail multiple times before it happens. This knowing must come from within, no one else can do it for you. Others can lead by example, but thefree will to make it happen is yours.

A few years ago I began to mediate in earnest on a daily basis. I would get to the same point in every meditation, but could go no further. I would find myself traveling through a vortex. I would suddenly exit the tunnel and be standing before a green brick wall. It rose up from the ground and continued in all directions as far as I could see. I tried multiple times to go through the wall or around the wall but I always failed. It was not unlike the glass dome.

This continued for more times than I can remember. If I attempted to explore past the realm of consciousness that I had been taught exist, I would find myself in the vortex and then at the foot of this immense green brick wall. I was too caught up in being blocked from further exploration to remember that green is the color of the heart chakra and the gateway to higher realms of reality. Then one day during my meditation, I had arrived at the same spot at the foot of this green brick wall. I effortlessly called on my Higher Self and my spirit guides for help. It was something I had never considered before but it was as natural as ringing the doorbell at a neighbor’s front door. Instantly I was surrounded by my guides and together we raised our hands and slapped them down on the ground in unison. The great wall crumbled to the ground and no longer blocked my path.

Expanding your awareness to multidimensional consciousness is as simple as remembering and claiming your own magnificence on a daily basis. You have waiting for you all you need to walk through that dome, that veil, that wall. It is within you. All you need to do is recognize that you within this 3D reality don’t have the tools to see what is around you and invite your Higher Self into your consciousness. Remember that your Higher Self is you. It is much closer to your True Self than that 3D reflection of flesh and bones in the mirror.

With patience, determination, focus, intent and most of all practice, you will be answered. Your consciousness will expand and you will marvel, “wow, was that all there was to it?”.

Now we are doing yoga….

Blair is the co-owner of Yoga Daily in Mt. Pleasant, SC.   He is a certified yoga instructor, recovering lawyer and a spiritual student.  The content of this blog is what Blair considers to be universal truths that span all dogma and religion and it is offered to you in Love and Light.  Check out Yoga Dude for additional blog entries.  You can contact Blair at blair@yogadailymountpleasant.com.  Yoga is but one path to the knowing that we are all One.  Please take what resonates with you and leave the rest without judgement or offense.